Be the Change: Lifelong Peacemaking and Justice Seeking

The panel discussed the art of doing peace and justice work, centered around Be the Change, a new Skinner House Book by the Reverend Stephen Shick, senior minister of the Unitarian Church of Marlborough and Hudson, MA. Shick and a panel of fellow Unitarian Universalist (UU) leaders in peace and justice work spoke about why they do this work, and what obstacles they have found in doing it.

Dr, Schultz said that he does this work in order to have an effective vehicle to channel his anger at the atrocities and inequities in this world. In his youth, he went on, he had two experiences which stayed with him, and are partial answers to why he does the work. One was visiting Robert E. Lee’s house and looking at what he thought was a pen for animals to stay in. His parents said “No, that is where the slaves lived.” The other was watching his father get into an animated discussion with a friend’s neighbor in Florida, which resulted in them leaving suddenly, and his father saying “You are a damn fool with all of your talk about Negroes.” His greatest personal obstacle is laziness, he says, and it is his love for a world he finds so sad that gets him over this obstacle. Shultz ended with this quote from E. B. White: “I arise in the morning torn between a desire to improve the world and a desire to enjoy the world. This makes it hard to plan the day.”

For Wendy von Zirpolo, working for peace and justice is central to her religion. She made six or seven trips to New Orleans before starting her service as minister of the Unitarian Universalist Church of Marblehead, MA. She knew it might not meet her need for effectiveness to ride into town and announce that they were doing more trips, in her brand new congregation. Instead, she listened to the congregation. New Orleans and work on the gulf coast are now part of the social justice work of the Marblehead church. This has led to a relationship between the church and Habitat for Humanity. Separately, the members have worked with the youth of the congregation to develop lobbying skills around Gay, Lesbian, Bisexual and Transgendered issues. Von Zirpolo's personal obstacle is sadness, because she feels so small against our wounded world.

Dick Gilbert believes that this life is our only opportunity to grow a soul—to love and be loved. He feels that he is engaged in an open-ended spiritual journey of soul building. To him, “Our stories, and the experiences we've had, are what we internalize, and they define who we are.” Gilbert was called to be a Unitarian Universalist Minister at a Boy Scout Jamboree when he was 14, a choice he says he has almost never regretted. He told stories about his work for peace and justice around the world, and closed with a quote from Annie Dillard: “There is no one but us.”

Bill Gardner does this work because of his own internalized racism and white supremacy. Those, he says, come from how he was socialized by the media and the UU church. Today, Gardner thinks of himself as a recovering racist. The crucial part of this work, for him, is to move from racist to anti-racist, which he views as a deeply spiritual process. He has three spiritual practices which he uses for this work:

And, finally, passion is important for him.

Dr. Sharon Welch talked about how we might begin to make sense of stories, commitment and internal struggle. She first became aware of self-righteous anger at others in observing the infighting of peace groups in Boston in the 1980s. She saw a lot of groups who said “If everyone else would forgo partial solutions, and adopt mine, we'd have lasting peace. " She thought it was New England crankiness. Welch uses the phrase “deep constructive engagement” for what she believes is most needed in this process. Other components, for her, are admission of error, and ceremonies of respect. And she reminded us to respect those who have done this work in the past, and honor those who will do it in the future. 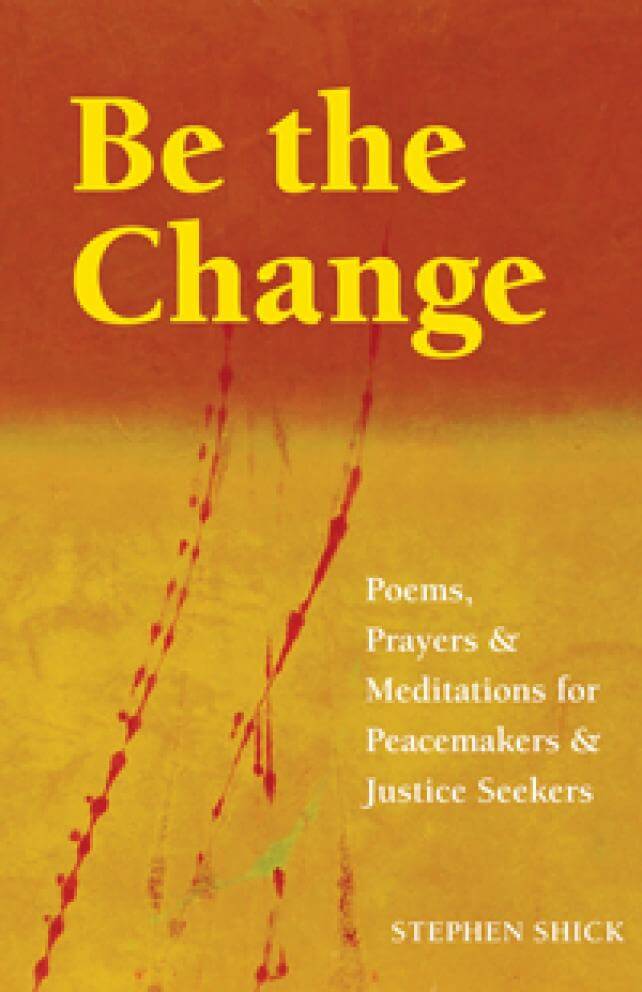 Be the Change Poems, Prayers and Meditations for Peacemakers and Justice Seekers

This collection is designed to inspire and sustain activists and others who are working for a better world. Brimming with poignant and inspirational quotations and verse from Jesus to Shakespeare to Edna St. Vincent Millay, Rachel Carson and Maya Angelou.