The Arc of the Universe: the Unitarian Universalist Association's Anti-Racism Work

The three authors of the new book The Arc of the Universe is Long shared their painful and transforming experience writing and compiling this detailed history of the Unitarian Universalist anti-racism journey. Their voices were augmented by many others during this workshop: Rev. Bill Sinkford, Rev. Jose Ballister, Dr. Finley Campbell, Rev. Josh Pawelek, Rev. Mel Hoover, Rev. Clyde Grubbs, Rev. Marjorie Bowens-Wheatley, Rev. Patricia Jimenez, Rev. Danielle DiBona, Janice Marie Johnson, Rev. Marta I. Valentin, and many others, in a moving mosaic of experiences spanning 17 years since the Calgary resolution in 1992. In the book, there are 155 voices, and counting.
The authors felt the need to collect the words of as many as possible on this journey, and noted that words such as race, racist, and anti-racist are loaded and need to be used carefully. These words have been the subject of much debate and are carefully defined in the book. The authors use the words in the context of the times.

In telling the stories using multiple voices, the authors accepted that no one "truth" exists. They focus on three themes:

Sometimes, they said, it was difficult to persuade people to speak. The pain was too great, too raw. But they persevered over four years because of a deep commitment to hear multiple voices, and to illuminate and view the truth from many perspectives.

At times, they found the experience overwhelming, though it was also liberating. It deepened their appreciation for who we are as a religious people, though it also added to their sense of confusion. Sometimes the puzzle pieces would not fit neatly together. Nevertheless, they eventually achieved the goal of this 650-page book, to create a space for reflection, and also for hope.

Chip Roush talked of the timelines of events. Although the full title of the book refers to the 1992 General Assembly (GA) in Calgary, the stories and voices go back to the 1960s, to Selma in 1965, and to the Cleveland GA in 1968. At the other end of the timeline, the authors are very aware that it is difficult to write a history of events that are still going on today.

They talked repeatedly about the importance of relationships. Fear of conflict became embedded in Unitarian Universalist (UU) culture; or perhaps it would be more accurate to say it became more deeply embedded than it already was.

The authors did not shy away from difficult issues and controversies, such as those surrounding the Crossroads Ministry training. Their approach is to let many voices speak and accept that no single truth is adequate.

The many voices also effectively display the diverse spectrum of racial groups, beyond black and white, that is now becoming more evident, both within UU churches and throughout the nation. This spectrum is apparent in the diversity of the three authors, in the photograph on this page, and is even more apparent in their book, which describes the emergence of the Latina/o UU Networking Association (LUUNA) in 1995 and the Asian/Pacific Islanders Caucus (A/PIC) in 2002. (On page 434 of the book, Young Kim described the first "Asian sighting" at the 2001 Cleveland GA.)

The authors each talked about their personal experiences writing the book: reliving the fear, the anger, the pain, and how it became a work about relationships. Leslie Takahashi Morris summarized the experiences: "It is important to wrestle with this history, to honor the relationships, to understand."

A workshop participant asked, "How do you name the 'Ouch' without closing off the dialog?"

Leon Spencer and Leslie Takahashi Morris responded, "We have to take the risk and stay in the dialog." And Janice Marie Johnson added, "We do not grow up learning that conflict is something we wish to engage in. Conflict is not good or bad. Our job is to learn how to be in relationship." The message: Prepare for conflict, and don't expect it to be painless.

Rev. Marta Valentin closed by reading her poem "We are Trying to Tell You."

People of color have been trying to tell UUs how to keep us here.
Do you hear us? Are you listening?

…all love is the same
but it must be expressed truthfully.

The poem is on page 548 of The Arc of the Universe is Long but this reporter believes it is important to read the other 547 pages before you get to it. 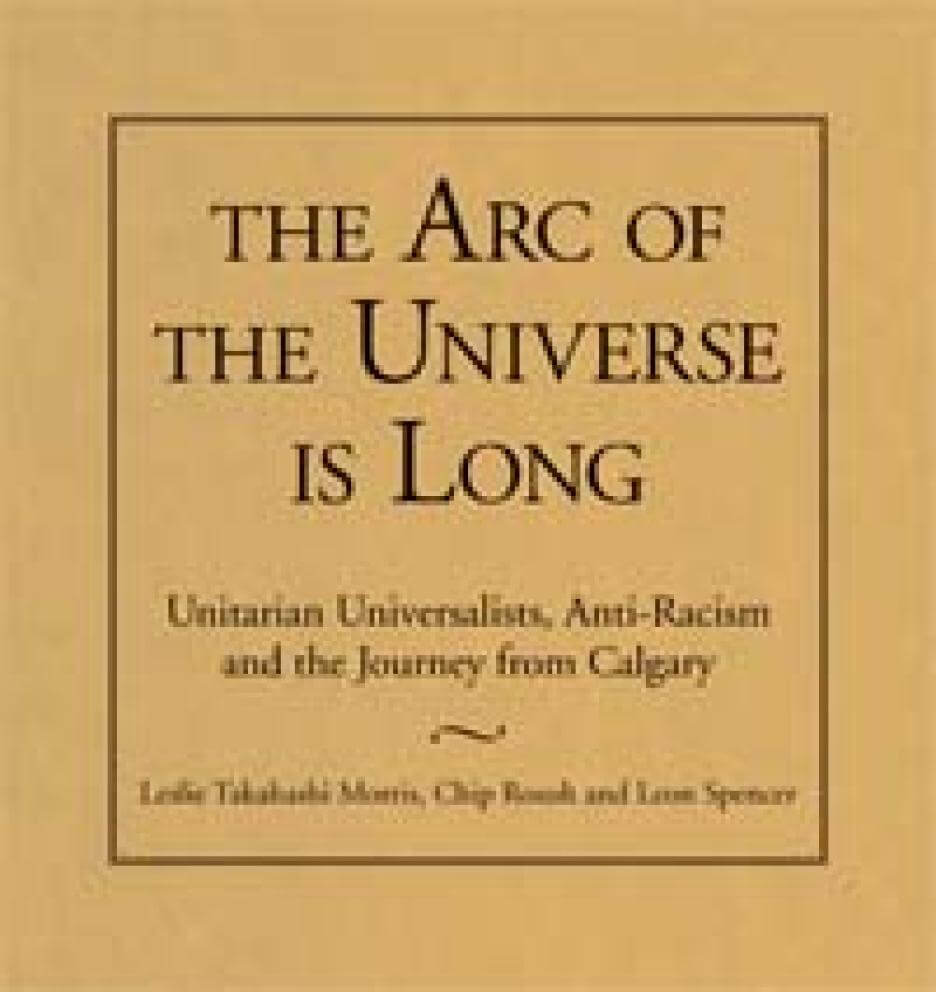 The Arc of the Universe Is Long Unitarian Universalists, Anti-Racism and the Journey from Calgary

A history of the UUA journey toward becoming an anti-racist, anti-oppressive, multicultural movement.