The Rev. Kathleen Rolenz, editor of the collection, began with her story of finding Unitarian Universalism in 1983, and her experience during her first year of ministry in an ecumenical reading group of discovering that the stories were "as if Jesus became alive for me."

"What does it mean to say ‘Jesus is my Lord and Savior?'" she asked, in her selection. She talked about how Jesus is more than a teacher for her who provides a role model: Jesus "saves me when I refuse to assign evil motives" or "put my ego out of the way," for instance.

The Rev. Dr. Anita Farber-Robertson then talked of her own difficulty in "coming out" as a Christian in the Unitarian Universalist ministry. "For the good of our souls and for the good of our ministry, we have to be known as who we are." She talked of ministering to humanists in UU congregations, pointing out that it works best when neither attempts to "make the other into our own likeness."

In her essay she described her parents who saw organized religion as one of the greatest impediments to social justice, and her developing sense that their vision, and hers, was rooted in a Biblical ideal. She talked of the "God who walks with me in Jesus in my journey towards wholeness, justice, and love."

The Rev. Ron Robinson talked of his different path, where Jesus led him to ministry, rather than finding Jesus after becoming a minister. He spoke of his journey which included Methodist, Mormon, Bah'ai, and Eastern philosophy. For him, the touchstones of faith are that God works in freedom, that God is present in other stories of freedom, and that to follow Jesus means "to be in right relationship with those who are different from me."

After telling their stories through their readings, the three opened the microphone to others, asking "How does your theology inform how you live your life?"

Answers ranged from the fundamentalist-raised UU who came to UUism as a "compromise" when she married an atheist, and who yearns for more spiritual feeding. The presenters mentioned the option of creating a Christian Fellowship group within a congregation.

Another said that the findings of the Jesus Seminar limit the Jesus of history to less than the stories of the Bible. "Which Jesus do you mean," he challenged. Another called himself a "seven-principle Christian," recommending that everyone "needs to put Jesus together for yourself."

One told of being raised as a Methodist, and feeling that the family was more concerned about "What will the neighbors think?" if they did not attend church. She recalled thinking at the time, "Are we worshipping the neighbors?" Another told the story of being an "evolved Catholic," whose focus was always about Mary's protection and love, and who came to a UU church because it was the only church that would do an interfaith wedding for a friend, finding a longing that the secular world couldn't meet, and finding the feminist exploration in UUism important to "get in touch with the feminist side of God and spirit." "You still hear so much male presence in Christian Unitarian Universalism," she added.

Another talked of finding Christianity through doctoral work, and learning about the Talmudic idea of partnership, and urged using historical documents honestly. And the last audience speaker noted that the Jesus Seminar "helped tear my faith apart," and stressed that the "truth" in parables is about how to live. She expressed a continuing need to come to a "Jesus I can fall in love with." 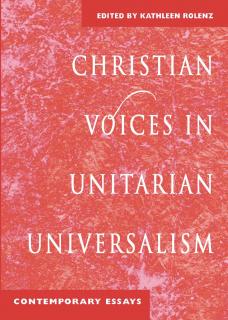 Personal stories reveal what it means to be a Unitarian Universalist Christian today.