Think of where you feel safe and at peace. What’s the signal that tells you it’s okay to be at peace? (Ask for answers.)

For people in the United States military, there’s a special signal that says “you’re okay, and you’re at peace.” It's a melody called "Taps," and it's only 24 notes long. It was composed by a general in the Civil War and his bugler.

In the 1860s, the end of the day was important. If there was time and peace enough to play Taps, that was a signal that the camp was relatively safe. It meant that you were not under attack. It meant that there were no enemy soldiers to worry about.

To a camp of soldiers, the notes of Taps meant that, unless you were on duty, you could close your eyes and sleep in peace.

They say that the first time Taps was played at a service for fallen soldiers also took place during the Civil War. In those days, the traditional military salute was, as it still is, the firing of a three-round volley of rifles. But this one time, they say, was after a long battle, when finally a cease-fire had been called, and both sides had stopped to bury their dead.
In one camp, as the work ended and the memorial service began to take shape, the soldiers knew that sounding the artillery salute might be taken as a return to fighting, and not as a sacred memorial. Someone had the idea of sounding a bugle, and that sound would never be taken as an aggressive act of war.

Taps came to mean the same thing. It meant the safe and quiet end to the day, time to rest, time to turn the lights out, to let their eyes close, and as best they could, to be at peace.

That’s what Taps means: it's like a powerful prayer.

Let’s listen to it. < play recording of Taps >

We try to make our congregation a place where people can feel safe and at peace. We work outside of these walls to create a community like that, too: a world where everyone feels at peace in their neighborhoods and towns.

[Alternate ending: This weekend, many people in the U.S. are remembering and honoring all those who have died while serving in our military... so you might hear Taps again. If you do, maybe you can stop what you're doing and think of every soldier who might have been afraid, and then let Taps remind you that they're now at peace.] 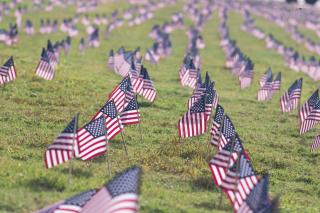 Called by Loss, Called by Peace

Called by Loss, Called by Peace