Every October and November in the United States, we find ourselves in a season of false and misleading stories about European settlers and Native Americans. First there’s the story that Columbus discovered America in 1492. Then there’s the story about the Pilgrims and the Indians at the first Thanksgiving. It is astonishing, after all the work done by Native activists and their allies, that these stories keep returning unchanged year after year. Perhaps many people are willing to acknowledge, if pressed, that when Columbus supposedly “discovered” America, it was already full of people. But that “discovery” has a more sinister history that’s not often talked about.

Prior to 1492, European church leaders and monarchs had collaborated in a stunning series of proclamations, which became known as the Doctrine of Discovery. In 1452, a papal bull declared that the king of Portugal had the right to conquer any Muslim and pagan peoples and enslave them. A few years later, a second letter declared that all the Christian kings of Europe had the right to take the lands and possessions of any non-Christian people, and keep them in perpetuity. If the pagan inhabitants could be converted to the Christian faith they might be spared, but otherwise they could be enslaved or killed. The Doctrine of Discovery was also later claimed by England in 1496, authorizing English explorers to seize any lands not already discovered by other Christian nations.

The Doctrine of Discovery became the legal basis for the “discoveries” of Columbus and others, and for the resulting attempts to conquer and colonize the western hemisphere, unleashing genocide on its peoples. It was also the legal basis for the slave trade. Its influence did not remain in that distant past — it’s still a source of oppression to this day. It became the basis of U.S. Indian Law, beginning in 1823, when Chief Justice John Marshall ruled that “Christian people” who had “discovered” the lands of “heathens” had assumed the right of “dominion,” and thus had “diminished” the Indians’ rights to complete sovereignty as independent nations. He claimed Indians had merely a right of occupancy in their lands. This decision has never been overturned, and is still cited on a regular basis in Federal court.

Responding to the requests of Indigenous peoples, several religious denominations have passed resolutions to repudiate the Doctrine of Discovery — including Unitarian Universalists, in 2012. These resolutions are a first step toward reckoning with this history of stolen lands and stolen children. 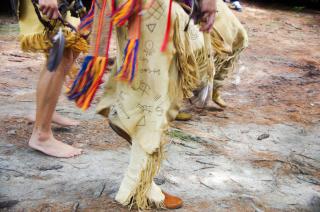 I want to tell you about my bicycle. The frame is a sparkly kind of blue and it has pink handlebar tape. And guess what color the wheels are? Lime green! I love my bicycle. Now suppose this was your bicycle. And suppose one day you biked to school and totally forgot to lock your bike when you got...

In 1617, a few years before English settlers landed, an epidemic began to spread through the area that became southern New England. It likely came from British fishermen, who had been fishing off the coast for decades. By 1620, ninety to ninety-six percent of the population had died. It decimated...