In 1617, a few years before English settlers landed, an epidemic began to spread through the area that became southern New England. It likely came from British fishermen, who had been fishing off the coast for decades. By 1620, ninety to ninety-six percent of the population had died. It decimated the tribes, and left many of their villages empty.

One of those villages was Patuxet. When the English settlers arrived in Plymouth Harbor they found a cleared village with fields recently planted in corn. This was a big part of the reason they chose it for their settlement. All of the village's people had died from the epidemic, except for Tisquantum, whom we know as Squanto. We never really hear the whole story about Squanto. We hear he taught the settlers how to plant corn and fish and hunt the local area. But how was it that he spoke English? Here’s the story as told by James W. Loewen:

As a boy, along with four Penobscots, he was probably stolen by a British captain in about 1605 and taken to England. There he probably spent nine years, two in the employ of a Plymouth merchant who later …helped him arrange a passage back to Massachusetts.

He was to enjoy home life for less than a year… In 1614, a British slave raider seized him and two dozen fellow Indians and sold them into slavery in Malaga, Spain. Squanto escaped from slavery… made his way back to England, and in 1619 talked a ship captain into taking him along [as a guide] on his next trip to Cape Cod.

Squanto walked to his home village, only to make the horrifying discovery that he was the sole member of his village still alive. All the others had perished in the epidemic two years before.

Perhaps this was why Tisquantum was willing to help the Plymouth Colony, which had settled in his people’s village. Or perhaps he was there to keep an eye on them.

The settlers, too, lost half their people during the first hard winter. There were only fifty-three settlers who survived until the harvest festival that was later declared to be the first Thanksgiving.

It was a brief moment of tentative peace. One generation later, the English settlers and the Wampanoag were at war. For many Native people in our time, the day called Thanksgiving has become a Day of Mourning, for the hundreds of years of losses suffered by their people. 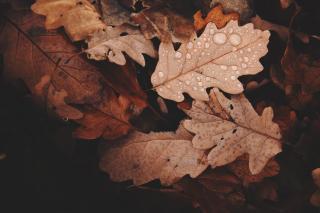 Every October and November in the United States, we find ourselves in a season of false and misleading stories about European settlers and Native Americans. First there’s the story that Columbus discovered America in 1492. Then there’s the story about the Pilgrims and the Indians at the first...