Participants learn about Thomas Jefferson’s version of the Bible and examine how it differs from a traditional Bible.

Ask participants if they are familiar with a book called the Jefferson Bible. Tell them Jefferson did not name it the Jefferson Bible. He entitled his work The Life and Morals of Jesus of Nazareth, Extracted Textually from the Gospels in Greek, Latin, French and English. The work was not published during his lifetime, although his friend John Adams wanted him to publish this work. [The Jefferson Bible is published by the UUA's Beacon Press. Jefferson's original cut-and-paste copy is being restored at the Smithsonian museum.]

Jefferson considered himself a Christian, but he felt unease about portions of the Bible that seemed to him obviously inaccurate, created for some purpose other than transmitting the teachings of Jesus. After thinking about, studying, and corresponding with friends for many years, Jefferson finally undertook the work of separating the grain from the chaff-in other words, trimming the Bible back to only what seemed to be the fundamentals of Jesus' teachings. If Jefferson had published this work, it would have been very controversial.

Jefferson took out the virgin birth; he thought it was an elaboration, and that Jesus was just as divine without it. He took out the star shining over Bethlehem, took out the Magi. Jefferson also removed all of Jesus' miracles: no water turned to wine, no walking on water, no calming storms, no healings or bringing people back to life, no loaves and fishes to feed 5,000. Most Christians have never heard of Jefferson's Bible, but would reject it for this alone-the miracles are considered essential proof of Jesus' divinity. Again, Jefferson thought they probably did not happen to begin with, and Christ did not need any proof beyond his exquisite life and work.

Jefferson's process was scholarly. He acquired the oldest texts he could find, sending to Europe for some. Being multilingual, he used ancient Greek, Latin, and French texts in addition to the Standard English Bible of his time. Then, page by page, he laid the verses out side by side and compared. Most sections with contradictions of fact he excised completely. Jefferson did not rewrite anything; he only edited, but his editing was radical. What resulted was a slim gem of a volume that he used for his personal devotions for the rest of his life, consisting almost entirely of the life and works of the human Jesus.

Distribute copies of the Jefferson Bible. Ask what participants notice right away. Jefferson utilized only the four Gospels (the books of Matthew, Mark, Luke, and John), then trimmed much of them, so even working with four versions it is much smaller than a standard Bible.

Ask for participants' thoughts. Were they aware of the Jefferson Bible? If so, what had they heard about it? Continue discussion with questions like the following:

Distribute standard Bibles and ask youth turn to Matthew, the first Gospel. Distribute writing paper and implements. Invite youth to compare the text of Matthew as revised by Jefferson with the commonly used Bible text. Ask: 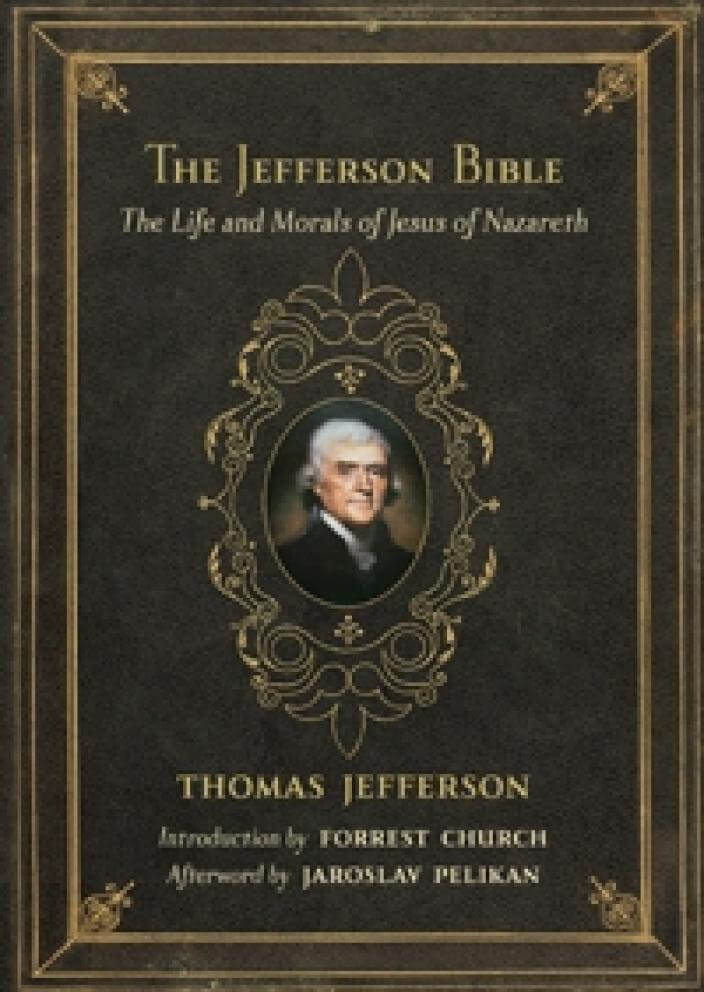 The Jefferson Bible The Life and Morals of Jesus of Nazareth

The Jefferson Bible offers extraordinary insight into the logic of Thomas Jefferson and the Gospel of Jesus.