“Level Two is where you become privy to the giant mystery, the fabulous conspiracy that is Santa. You are entrusted with the secret, that Santa is SO much bigger than you imagined, that you, in fact, get to be Santa, too.”
—Rev. Joanna Fontaine Crawford

One year—but not the year the Christmas tree fell on me at midnight, causing me to weep with self-pity and exhaustion—I was so happy with how the tree looked, with all the presents underneath it, including the ones that “Santa brought” in their different-than-the-others’-wrapping-paper, that I took a photo before going to bed, wanting to preserve perfection.

A few months later, my two kids were in the back seat of our car, looking at that image, when the younger one said, in a confused tone of voice, “Who took that photo?” She realized something was amiss. Her young mind had observed that it had to have been taken after Santa brought presents and but before the presents were opened—and she and her sister were always the first downstairs on Christmas morning.

The dreaded “two plus two equals Santa-Claus-does-not-exist” moment seemed to be upon us. I wasn't ready for this moment, which eventually visits Christmas-celebrating families. Or tooth fairy families. Or Three Kings families.

I hesitated, not sure what to say.

Thankfully, despite the fact that the older sibling had been teasing and tormenting the younger one moments before, on a dime she became her younger sister’s protector. Invoking full older sibling authority, she asserted, “Don’t you remember when Mommy took that picture just before we got to open our presents?”

Since I was driving, I couldn’t see what passed between the two of them—what shared gaze of questioning or trust or oblivion or wishful thinking. I just know that with that single generous gesture, my younger child’s belief in Santa stayed intact that year (and years to come: much longer than most).

More sweetly, my older one took her first step toward being a Level Two Santa: sustaining the magic and generosity, and becoming part of it herself. For this parent, it was the best Christmas gift that year. Maybe ever. 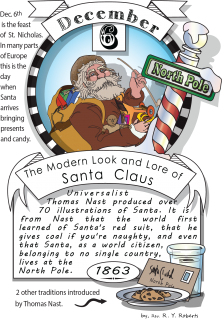 December sixth, The Modern Look and Lore of Santa Claus (1863). Universalist Thomas Nast produced over seventy illustrations of Santa. It is from Nast that the world first learned of Santa's red suit, that he gives coal if you're naughty, and even that Santa, as a world citizen, belonging to no...