A Note on Definitions

By Commission on Institutional Change

In our work toward the beloved community, a search for a common language and clarity around the meaning of the words and terms used by those with diverging opinions is crucial. The work of the Commission on Institutional Change indicates that there will probably be no consensus on language and yet a lack of consensus should not get in the way of continued conversation and action.

Many terms evoke discomfort, due to their past and current cultural usage across various generations, the interpreter's experience, and various ways of understanding.

“White supremacy culture” is one such term that has continually presented a block in our goal toward a world of freedom, justice, and equality. We hear, for example, that some are very concerned about the term “White Supremacy Culture” associated with their UU faith though those very words were used in the charge to the Commission.

Why Focus on White Supremacy Culture/Racism?

In my reading, our first principle leads us to value the inherent worth and dignity of all people, and our second principle, asserts the importance of equity.

These two principles definitively oppose the concept of white supremacy, the reality of white hegemony, and the concept of “whiteness” having more inherent worth and value than other identities.

Further, both our personal journeys of acceptance and communal journeys toward universal equity among people reflect the history of our denomination’s journey from the “chosen people” trope of our more Calvinist roots, to the ever growing union of universalism.

The term “white supremacy” has an image for many of Neo-Nazi skinheads, Confederate flags, and swastikas, and other individualized expressions.

For others, the term “white supremacy culture” describes the totality of race-based oppression, in its ideological interpersonal, institutional, internalized, and intersectional expressions--the term describes both the breadth and the depth of the impact in a way other terms such as “oppression” or “unconscious bias” do not.

On one hand, we have a definition that is so individualized that many of us, rightfully, fail to identify with it.

On the other hand, we have a definition that is so broad, as to occasionally overlook the processes which carried us to our current system of racial hegemony.

And further, some of us find it difficult to see our submergence in this cultural setting especially when we are ourselves victims of its brutal logic, due to our own individual places within its gradation. For others, the myth of individuality and meritocracy obscures the reality of privilege.

In my work over the past few years, and with the help of many colleagues and loved ones, I’ve come to some helpful ways of defining and interpreting this woeful system of oppression we find ourselves in.

Also, that while we may not agree on every instance of terminology, we may reach a common agreement on history and process.

In the spirit of that “search for truth and meaning” uplifted in our fourth principle, I submit an opinion on the definitions and processes as I understand them.

An all-encompassing ideological system that permeates our entire way of life.

White supremacy is an ideology and organizing principle that presents an intrinsic denial of the African origins of life and civilization in favor of a revisionist view whereby all civilization and culture stems from Europe, centers the white male as the standard from which all other humans deviate, and seeks to create and maintain “whiteness’ as the dominant currency within the system it creates.

Historically, this belief system has been supported by major religions, social, educational, legal, and political institutions within the United States. The result is the stratification of society into a system where whiteness is considered the ideal, proximity to whiteness beneficial, and non-whiteness subject to ongoing surveillance and control.

The historical record shows us that the current system was created through a combination of “guile, fortuitous outcome of circumstance and sheer brutality” as described by author George Jackson(1941-1971) by people with explicit racial and class interests in mind.

This refers to the process by which one small group of Europeans (initially Anglo-Americans, which became the planter class/“Slave Power”) colludes to maintain power over everyone by aggressively assimilating successive waves of Europeans into the “white” cultural group, establishing several layers of agents and buffers.

This term references the racially based genocide, enslavement, disempowerment, and exploitation of non-white groups by means of violent coercion, manipulation, and collusion.

This delineates a racial caste system that ensures the White identity’s comfort, safety, defense, power allotment, and influence paramount over all other identities.

Though the usage of “domination” may seem harsh to some, I believe it is nonetheless more accurate than “supremacy.” Europeans are not in control of the planet’s resources because they are inherently supreme rather this has been accomplished and maintained by force.

White supremacy is best understood as an ideology, a belief system, or even a pathology*, not an action or effect or even a culture.

White supremacy is not inherently true as white people are not inherently supreme. In fact, that false assumption or belief that white people are supreme, can be understood as the defining part of that ideology. That false belief is then used to inspire aggression toward other Europeans, and “non-whites”, with the purpose of establishing a racial caste system.

White supremacy is the ideology, white assimilation and aggression are the actions, white domination is the outcome. This is my analysis.

*mental, social, or linguistic abnormality or malfunction, not medical

The Commission on Institutional Change calls us in to a practice of deep listening and reflection on the words of others.

Randomly select a line of reading from this blog post and try to engage it on these four different levels:

For a demonstration on how to engage in this practice listen to the Harry Potter and the Sacred Text podcast on commitment: http://www.harrypottersacredtext.com/listen-2 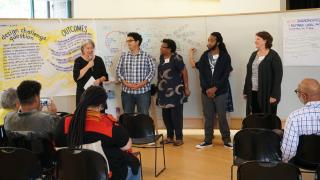 About the Commission on Institutional Change

Meet the Commission on Institutional Change, and learn how they work together.

About the Commission on Institutional Change