Unitarian Universalism honors diversity of genders and gendered experiences. This page offers ways you and your congregation can increase your welcome and inclusion of transgender people, basic definitions, and further resources.

10 Ways to be More Welcoming and Inclusive of Transgender People

Our culture tends to limit its understanding of gender to only two options: man and woman. Unitarian Universalism recognizes that there are more than two genders, and an infinite variety of gendered experience in the world.

The biological attributes such as anatomy, chromosomes, and hormones that inform whether a person is male, female, or intersex. Where sex refers to biology, gender refers to the cultural and social understandings that are layered on top of biology.

The ways in which a person manifests masculinity, femininity, both, or neither through appearance, behavior, dress, speech patterns, preferences, and more. This term refers to how a person expresses their gender identity or the cues people use to identify gender.

A system of classifying sex and gender into two distinct and disconnected forms—male/man/masculine and female/woman/feminine—and assigning all bodies, identities, roles, and attributes to one side or the other. The gender binary is dependent on policing people to make sure they don’t digress from the system in appearance, anatomy, or behavior.

The gendered pattern of a person’s sexual attractions, or the gender of the people a person is attracted to. Gender identity refers only to a person's own self. Gender and sexual orientation are often lumped together, despite being different, because of societal expectations around sex, gender, and expression. Transgender individuals can be lesbian, gay, bisexual, queer, straight, or any other sexual orientation. Everyone has a sexual orientation.

First coined to distinguish gender benders with no desire for surgery or hormones from transsexuals, those who desired to legally and medically change their sex, more recently transgender, trans, and/or trans* have become umbrella terms popularly used to refer to all people who transgress dominant conceptions of gender, or at least all people who identify themselves as doing so. The definition continues to evolve.

A term that is becoming increasingly popular to describe people who are not trans or gender variant—in other words, those whose gender identities, presentations, and behavior “match” (according to the gender binary) the sex they were assigned at birth. Cis is a prefix with roots that mean “on the same side”; trans and cis are neutral descriptors.

Terms used by people who identify as being between and/or other than man or woman. They may feel they are neither, a little bit of both, or they may simply feel restricted by gender labels. Two spirit is a complex term derived from some Native North American cultures and can sometimes mean a mixture of masculine and feminine spirits in the same body.

General terms for people who bend gender in some way and/or have non-binary gender identities.

A general term used for a variety of genetic, hormonal, or anatomical conditions in which a person's reproductive or sexual anatomy doesn’t seem to fit the typical definitions of female or male. When a child is born intersex, many doctors and parents respond with panic and rush to correct the perceived problem with surgery, which often causes mental and physical difficulties later in life. Some intersex individuals identify as transgender or gender variant; others do not.

Historically this term has been used to refer to individuals who have medically and legally changed their sex, or who wish to do so. Most transsexual people feel a conflict between their gender identity and the sex they were assigned at birth. Other labels used within this group include MtF (male-to-female) or trans woman, and FtM (female-to-male) or trans man.

The complex process of authentically living into one’s gender identity, often but not always including leaving behind one’s assigned birth sex. A transition may include coming out to one's family, friends, and/or co-workers; changing one’s name and/or gender markers on legal documents; hormone therapy; and/or possibly (though not always) some form of surgery. Not all trans people identify with the word transition and it should furthermore never be assumed that transition is a process to be “completed.” Some people who have transitioned no longer consider themselves to be transsexual or transgender and rather identify only as a man or a woman (occasionally “of transgender experience”). Others identify as a trans man or a trans woman.

Coming Out vs. Disclosure

Coming out (of the closet) refers to openly stating one’s identity (usually sexual orientation). Being out means being open about one’s identity. Being outed means someone else has disclosed one’s identity, usually without permission. Coming out is often a liberating experience for people who have previously hidden their identity; it can lead them to feel like they can be their authentic selves. However, trans people who have transitioned are not “in the closet” about their identity, so telling people that they are trans is a disclosure and is different than coming out. Trans people are not “fooling” or “deceiving” anyone about their identity by presenting themselves authentically as men or as women. 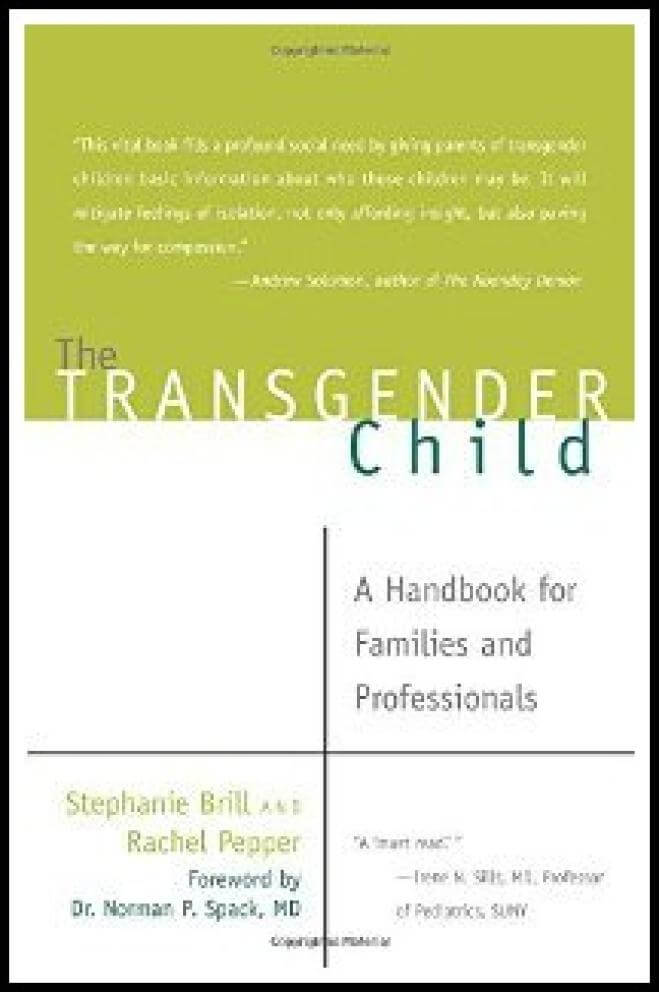 The Transgender Child A Handbook for Families and Professionals

By Stephanie Brill, Rachel Pepper
From inSpirit: The UU Book and Gift Shop