We are a welcoming faith. Unitarian Universalism doesn’t just open its doors to people of all sexual orientations and gender identities—we value diversity of sexuality and gender and see this diversity as a profound spiritual gift.

Language about sexual orientation and gender identity shifts and changes: new words are born; other words change meanings. Learning how different people use language to create meaning is important, as is using inclusive language ourselves. In conversation with many people and communities, we’ve developed some working definitions. Don't stop with these definitions, though--see the bottom of this page for next steps to deepn your understanding.

We affirm the inherent worth and dignity of every person. Sexual orientation is a central part of who we are—being true to ourselves and honoring each other’s truth is a spiritual imperative.

There are three basic types of sexual orientations: Monosexual, polysexual, and asexual.

Some people are exclusively attracted to members of only one gender. Sexual orientation labels used by people of the same sex include:

Some people are attracted to members of multiple genders. Sexual orientation labels used by polysexual people include:

Some people do not experience sexual attraction. Most people this applies to identify as asexual.

In addition to the above, some people don’t like and don’t use labels. Other people identify as Questioning: a term used to describe someone who is unsure of or exploring their sexual orientation and/or gender identity.

We affirm each person’s ability to judge for themselves who they are and express themselves in the way that is most authentic to their soul. We honor the diversity of truths that exists within our communities.

Gender is complex and multi-faceted. In North American culture several distinct facets of ourselves get lumped together when we talk about “gender”:

The cultural expectation is that one’s biological sex, gender identity, and gender expression will align in stereotypical ways: that someone who is male will identify as a boy/man and have a masculine gender expression, for example. This expectation does not serve our diverse world and the myriad experiences of self that exist.

For more definitions about gender identity and expression, see Transgender 101. We also have resources for Queer and Trans Youth.

Definitions can never encompass who we are as full human beings. The spiritual invitation is to cross divides of difference and take risks by authentically choosing to get to know one another. Labels can be tools of liberation or oppression—it’s all in how we use them. So don't stop with simply learning definitions. Here are three next steps for truly deepening your understanding.

Over the last 50 years, language around sexuality and gender has shifted and changed in incredible ways. New words have been born; other words have changed meanings and usages....

Unitarian Universalism honors diversity of genders and gendered experiences. This page offers ways you and your congregation can increase your welcome and inclusion of transgender people, basic definitions, and further resources.... 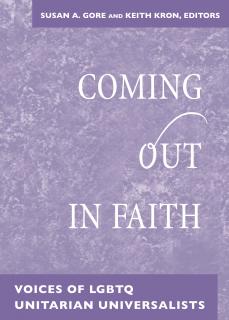 Coming Out in Faith Voices of LGBTQ Unitarian Universalists

Also available as an eBook.

Honest, accurate information about sexuality changes lives. It dismantles stereotypes and assumptions, builds self-acceptance and self-esteem, fosters healthy relationships, improves decision making, and has the potential to save lives. For these reasons and more, we are proud to offer Our Whole...