He phoned more than an hour ago to say he was on his way home. But I have yet to hear the scrape of the iron gate, the rattling keys, so I worry.

Most married women fret about a tardy husband: black women like myself worry more. I fear white men in police uniforms; white teenagers driving by; thin, panicky, middle-aged white men on the subway. Most of all, I fear that their path and my husband’s path will cross one night as he makes his way home.

Bob is tall, dark, with thick hair and wire-rimmed glasses. He carries a knapsack stuffed with work from the office, old crossword puzzles, Philip Glass [music], Ebony Man and People magazines. He cracks his knuckles a lot and wears a peculiar grimace when his mind is elsewhere. He looks dear and gentle to me—but then, I have looked into those eyes for a long time.

I worry that some white person will see that grim, focused look of concentration and see the intent to victimize. I fear that some white person will look at him and see only [their] nightmare—another black man in sneakers. In fact, my husband is another black man in sneakers. He’s also a writer, an amateur cyclist, a lousy basketball player, his parents’ son, my life companion. When I peek out the window, the visions in my head are those of blind white panic at my husband’s black presence. I see myself a sudden, horrified widow.

Once upon a time, I was vaguely ashamed of my paranoia about his safety in the world outside our home. After all, he is a grown man. But he is a grown black man on the streets alone, a menace to white [people]—even the nice, sympathetic, liberal ones who smile at us when we’re together. And I am reminded, over and over, how dangerous white people still can be, how their fears are a hazard to our health. When white people are ruled by their fears of everything black, every black woman is an addict, a whore; every black man is a rapist—even a murderer.

So when it’s ten o’clock and he’s not home yet, my thoughts can’t help but wander to other black men—husbands, fathers, sons, brothers—who never make it home. Even after I hear the scrape of our iron gate, the key in the lock, even after I hear that old knapsack hit the floor of the downstairs hallway and Bob’s voice calling to me, my thoughts return to them. 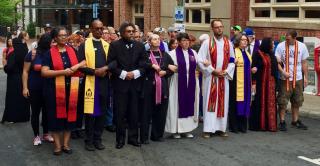 The Offensiveness of My Pain

By Shane Paul Neil
From WorshipWeb

I'm on my way to a job where I am the only black person in my office. I work with people who either don’t know or don’t care about Alton Sterling or Philando Castile. They are going to ask me “How are you this morning?” and the simple truth is that I can’t be honest. I can’t say that...

The Offensiveness of My Pain