The Unitarian Universalist Association's (UUA) Interim Co-Presidents, the Revs. Sofía Betancourt and William Sinkford and Dr. Leon Spencer, issued the following message in response to President Trump’s announcement that he will withdraw the United States from the Paris agreement on climate change:

As people of faith and conscience who affirm both the inherent worth and dignity of all and the interdependent web of all existence of which we are a part, we find President Trump’s decision to withdraw the United States from the Paris Agreement on climate change to be an affront to that depth of connection. Our interconnectedness does not end at a wall on the border or at the oceans that we cross.

In these times, it matters what company we keep. With this decision, the United States joins only two other countries in opposing this historic accord: the war-torn nation of Syria and Nicaragua, whose government is run by a virtual dictatorship. We are deeply troubled by the message this sends to our global allies and trade partners. Such a choice eliminates the United States’ seat at the table in negotiating policy action on global warming and creates greater space for authoritarian nations like China, Russia, and Iran to influence the direction of global climate action.

Unitarian Universalists have been dedicated to action on climate change for years now and clearly our work must continue. For those in the Washington D.C. area, we urge you if you are able to join a rally later today to show your support for the Paris Agreement or to organize a rally in your own community. There will also be opportunities for Unitarian Universalists to engage in climate justice activism at our annual General Assembly in New Orleans this June.

Unitarian Universalists remain committed to resisting the politics of hate, fear, and isolationism coming from the Trump Administration. For our own faith and values, and for the generations who will come after us, we know that we cannot remain silent. 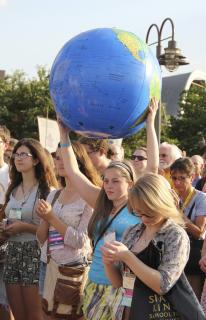 All life is interconnected. From the forest to the sea to humanity itself, each thread of being is woven into a single fabric of existence. We embrace nature’s beauty and are in awe of its power. We care for our environment so that it may sustain life for generations to come. We do this in...