There Is More Love Somewhere

Last summer at General Assembly, I walked out of the sanctuary we had made from the convention center space. As tired as I was, I returned more and more to my deeply introverted default of self, and I passed a woman who had to stop to talk with me.

Many religious professionals who have led a morning worship service know this is where the work begins.

And because she had enough compassion and grace to call me Dr. Rideout, she had given me enough time and opportunity to summon up a bit of stillness from the weary remnants of my churchman’s posture.

She looked into my eyes and spoke and sang to me with her own truth. She asked with genuine curiosity why it is that we don’t all sing the words that she had come to know.

I was compelled to respond to the woman I had just met with, “Thank you for trusting me with that question.” And then I explained to her why I thought it was necessary — particularly with the music of people of color — that we enter and examine these songs with more curiosity than colonization.

I thanked her, and I explained that for those of us who live with the privilege of knowing love, it can be difficult to understand the perspective of one who lives without such a privilege.

I explained that it can be difficult to understand the lived experience of those who have trouble finding the evidence of love in their immediate vicinity; in their church; in their neighborhood; in their city; in their nation; even in their planet.

I thanked her, and I explained that for some who don’t share the privilege of perceiving love “right here,” moving toward that idea of privilege had become a vital practice of Black faith.

I offered that if we, as a spiritual community of Unitarian Universalists, populated by well-meaning people, are to mean anything to the lives and the deaths of people of color, we must begin by learning — not squelching — the forms of expression that arise from these living perspectives.

And she said, “Thank you. I’ve never heard it expressed that way. I’ve never understood it that way. And I will never sing it that same way again.”

When we inhabit the music, the forms of expression of people who lived their lives along the margins of notice, we must notice that we have entered holy ground, a sacred space of learning; a sacred space of relationship.

Dear Liberal Allies, You and I learned very different things in very different ways. If you didn’t live an experience, then step aside. We students of color, gay students, trans* students, children of immigrants and refugees knew this stuff before our professors told us what to call it.... 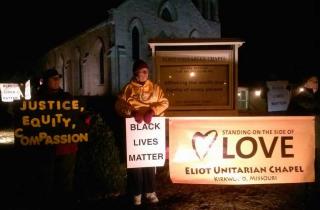 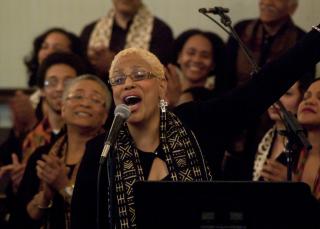 Reflections on "Lift Every Voice and Sing"

Martin Luther King, Jr. Day is a time when particular songs get sung; one of them is "Lift Every Voice and Sing." It gets sung in school, in church, and at various MLK day celebrations or over the course of Black History Month....

Reflections on "Lift Every Voice and Sing"