“Do you hear what these people are saying?”

Jesus told them, "Yes! Haven’t you ever read, ‘From the mouths of infants and nursing babies you have created praise’?”
—Matthew 21:16 (ISV)

Our family says the same prayer every night before we eat dinner as a way of collecting ourselves after a busy day. We say it together, and we always end with “Amen.” Or rather, we used to end it that way.

You see, for reasons known only to four-year-olds, my oldest son was obsessed with talking about “peanut butter” and “eyeballs” for most of his four-year-old year. My wife and I mostly put up with this good-naturedly, but our then-one-year-old son absorbed this language for months on end. Our older son gradually grew out of his peanut-butter-and-eyeballs phase, as children generally do, but our little one held this memory deep inside him.

One night months later, our younger son, by this time two years old, burst out at the end of our dinner prayer: “Amen-Peanut Butter-Eyeballs!” My wife and I laughed, rolled our eyes, and we all started eating.

It hasn’t stopped. Our little one says it every night, happy as can be. On those not-so-rare occasions when his attention is momentarily taken elsewhere, we wait expectantly and he always comes through: “Amen-Peanut Butter-Eyeballs!” Our mealtime prayer is no longer complete until he says it.

Ritual matters to us. Our family prays at mealtime because we want to practice and cultivate gratitude in our lives. We come together to give thanks, and to take a moment outside of the rush of our normal lives. I love that my children are taking it as their own, finding their own meaning in our practice. I love that my youngest son has taught me something about prayer: to be patient and to feel wonder, joy, and surprise.

Prayer
Spirit of Life and Love, may you continue to speak to us in many ways, including from the mouths of babes. Amen-Peanut Butter-Eyeballs. 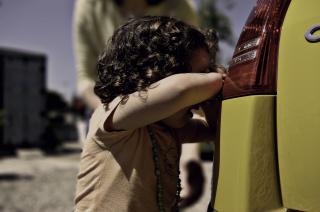 The Story of My Birth

Tell me the story of my birth, and help me understand how you were changed the day I entered the world. Help me know love, deep in my bones.

The Story of My Birth