The Easter Egg We Need

Your WorshipWeb Curator suggests that to prepare for this Time for All Ages, you prepare a regular hard-boiled egg (or not hard-boiled, but don't drop it!) and a red egg, which could be dyed, or a wooden egg painted red. Begin the story with the regular egg nearby, and hold it at the appropriate moment. When the story calls for it, quickly switch it out with the red egg.

Do you know who Mary Magdalene was?

She was a first-century Jewish woman who followed Jesus. She has been named the First Apostle, or the Apostle to the Apostles, because she was the first one to proclaim the Easter story. The men didn’t believe her.

There are many legends about Mary Magdalene. Just like so many other legends and stories and myths, the truth of the legend is not dependent on historical fact, but the internal truth of the story. It doesn't matter whether it actually happened. Its truth is true enough to make us tell the story again and again.

So, legend has it that Mary Magdalene staged a protest in the court of Caesar in Rome. As the story goes, Magdalene was a woman of means and influence (and chutzpah), and sometime soon after the crucifixion of Jesus, she procured an invitation to dine at the court of Caesar. She had a mission. She went to Rome to protest Pilate’s miscarriage of justice, and to announce the resurrection. The ancient tale says that as Magdalene stood up to speak, Caesar was about to peel a hard-boiled egg.

When he heard her announcement of the resurrection, he held up the egg and said, “He can no more be raised from the dead than this egg can turn red.” And there, in his hand, the egg turned red.

This may not be a story with historical weight, but it does account for those Eastern Orthodox icons of Mary Magdalene holding a red egg, the color that Eastern Christians dye their Easter eggs today as a reminder that God can always do something entirely unexpected.

Imagine if Easter preachers—and all the rest of us—had the chutzpah of Mary Magdalene. That would be as unexpected as Mary’s red egg. That’s the Easter egg we need. 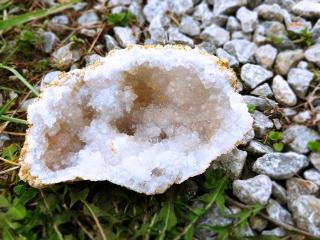 It Began with a Stone

By Lisa Fischbeck
From WorshipWeb

When some people think of Easter, they think of a bunny rabbit. Others would point to other fertility symbols and signs of Spring, springing forth out of the ordinary, the plain, the seemingly dead: butterflies, flowers, and the like. Christians might think of the empty cross, or of a cross with...

It Began with a Stone