We Are Not Guests

Am I a guest here. Here in this House. Are you?

Are we guests here. Here in this House. And, whose House do we inhabit?

In the small world of our lives the borders between us: easements, fences, gates, hedges—serve to delineate, to separate us. To remind us of where my property begins and ends.

Where your property begins and ends.

If you cross over: you are a trespasser or a guest in my house.

You’ve worked to own this small plot of land and the house erected on it.

You’ve claimed it. It is now part of your self. Your definition of self. Your identity.

If I cross over your fences: I am a trespasser or a guest in your house.

What does it mean then, that in 1845, the United States crossed over into Mexico…and took half of that country? Took land, resources, labor?

Was the U.S. trespasser? Guest?

Are there to be no consequences for taking what does not belong to you?

Should we simply forget whose House we inhabit?

To speak of hospitality in immigration often erases historical context: The actions of the past that have led us step by step into this current predicament.

Professor Miguel De La Torre writes, "Perhaps it might be more accurate to speak of the responsibility of restitution rather than the virtue of hospitality."*

Hospitality, in this case, implies that the “house” belongs to us.

That the land, the resources that are a part of this House is ours and we, who now live here, are being virtuous in our willingness to share.

It erases the history that would have us remember that those who cross the border today those choosing to brave the harsh conditions of the desert those who face the possibility of death, imprisonment, deportation, criminalization are doing so because the U.S. once crossed their borders to extract their resources and…labor.*

It is, for them, a matter of survival.

It is, for the U.S., a matter of restitution.

The prospect of restitution is scary.

Where do we begin?

With the descendants of those who were enslaved?

How do we acknowledge and address the complexities of our history, present and—if we’re not conscious—future of dominance?

What conditions and considerations would make it restitution possible?

And. For us—Unitarian Universalists— what would it mean for us to shake off the idea of hospitality as a central principle that is often attached to immigration and delve into the concept of restitution?

Whose House do we inhabit?

For we are not hosts. We are not owners.

Nor are we guests.

What, then, is our responsibility?

*Source: Testimony from a Scholar-Activist by Miguel A. De La Torre 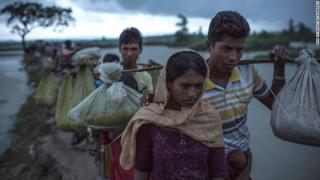 By Theresa I. Soto, Tracy Bleakney

Original version in English by Tracy Bleakney, traducción en español por Theresa Soto A child journeys far from home Fearful and brave, in need of safe harbor. Guided by this chalice, may we seek to understand the causes of flight. Like the comfort of a candle flickering in a window of darkness,...