Hope Will Be Restored

"After the Sabbath, as the first day of the week was dawning, Mary Magdalene and the other Mary went to see the tomb. And suddenly there was a great earthquake; for an angel of the Lord, descending from heaven, came and rolled back the stone and sat on it. His appearance was like lightning, and his clothing white as snow. For fear of him the guards shook and became like dead men. But the angel said to the women, “Do not be afraid; I know that you are looking for Jesus who was crucified. He is not here; for he has been raised, as he said. Come, see the place where he lay. Then go quickly and tell his disciples, ‘He has been raised from the dead, and indeed he is going ahead of you to Galilee; there you will see him.’ This is my message for you.”So they left the tomb quickly with fear and great joy, and ran to tell his disciples. Suddenly Jesus met them and said, “Greetings!” And they came to him, took hold of his feet, and worshiped him. Then Jesus said to them, “Do not be afraid; go and tell my brothers to go to Galilee; there they will see me.”
—Matthew 28:1-10

Unitarian Universalism, on the whole, wrestles with our Christian identity each year on Easter. Even though our faith tradition specifically cites Jewish and Christian teachings as sources from which we draw wisdom, and even though a large number of UUs identify as Christian, we seem to face a bit of an identity crisis come Easter.

What do we do with a story of literal resurrection? Well . . . we believe.

The resurrection of Jesus is one of the most sacred stories in Christianity; from that story emerges a renewal of faith.

Imagine being either of the Marys on that morning. These women were in mourning. They had lost not just a man they loved, but a teacher they were dedicated to and a prophet in whom they believed. Their shared grief must have permeated from them, rising from their skin like an unwanted perfume. They were going to anoint the body of Jesus, whom they believed to be a mortal man. A son of God, yes, but mortal. In tending to his broken body, they’d face the wounds of his death and the reality of loss.

I can imagine the hopelessness they must have felt. Jesus taught love and compassion, yet an act of betrayal ended him.

Do you remember the first time you felt true hopelessness? A moment when maybe it seemed like everything you wanted to be true and real and right was ripped away?

You’ve felt it. And I am as sure as I can be that the Mary Magdalene and Mary, Mother of James, felt it in every step they took that Sunday morning.

And then there was an angel–lightning and white and spilling words of emergence, words of resurrection—“He is not here, for he has been raised.” Words of hope.

The women fled the tomb quickly, with fear and great joy. And that’s what coming out of the hopelessness feels like, doesn’t it? It isn’t a sure-footed, steady pace. There's no certainty. Instead, it’s a mixture of worry and hope, of questions and only the vaguest of answers. Is this real? Will it last? I think it is. I hope it will.

Another important piece of this is that Jesus met his disciples in Galilee.

Matthew 28:16-20….
"Now the eleven disciples went to Galilee, to the mountain to which Jesus had directed them. When they saw him, they worshiped him; but some doubted. And Jesus came and said to them, “All authority in heaven and on earth has been given to me. Go therefore and make disciples of all nations, baptizing them in the name of the Father and of the Son and of the Holy Spirit, and teaching them to obey everything that I have commanded you. And remember, I am with you always, to the end of the age.”

Jesus brought his people back together. It wasn’t enough to offer them hope; he gathered them, affirmed their hope, then sent them out to share his faith of love and compassion. He promised to be with them.

Because it takes a village, right? That’s why we’re here. This is why we gather on Sundays in this sanctuary. It is why we gather at protests and rallies or family dinners or even coffee shops.

We are meeting each other in our Galilees, and we're making disciples of all our nations. We are sharing our words of love, and confronting hopelessness and despair. We are building villages with each other.

Imagine that sense of wonder and renewal the followers of Jesus must have felt. Awestruck. Renewed. Transformed by the love of another.

We’re doing that all the time.

We’re doing that at every Black Lives Matter meeting, at every Sunday service, and even at committee or Board meetings. We invite that feeling—awestruck, renewed, transformed by love—when we spend time together, and believe in humanity more and more.

This is what the story of the resurrection offers us—hope.

Hate and betrayal do not and will not prevail, says the resurrection. Hope will be restored, lives will be restored. We will emerge from the bleakest of absolutes to exist on in the glory of love.

I think this is why the resurrection is one of the most important stories in the Christian tradition. I think this is why Unitarian Universalists celebrate Easter joyfully, even if it gives us some kind of collective identity crisis.

The answer to “What do we do with a story of literal resurrection?” is believe. Believe in hope. Believe in Galilee. Believe that we are disciples of our love of humanity. 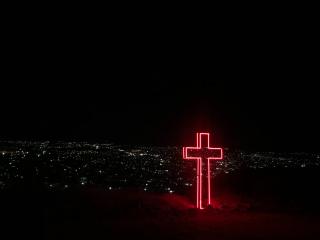 At sundown on Saturday, the Sabbath finally over, Mary Magdalene and the other women who loved Jesus began to prepare spices to pour over his body to honor him and say a final farewell. They were up all night, cooking and talking, and remembering his life....