A Time to Act and a Time to Learn

The Rev. Dr. Martin Luther King was murdered when I was in eighth grade. I remember so clearly watching the news on my family’s small black-and-white television, shocked at what I saw. They replayed news clips of the march on Washington and the “I have a dream” speech, of marches in Selma and Montgomery, of fire hoses, attack dogs, and militarized police, of the bombing of a church and the death of four little girls.

To use a biblical phrase, the scales began to fall from my eyes. The story of my country that I had been taught, the “land of the free and the home of the brave” with “liberty and justice for all,” my whitewashed civic religion, had left out, glossed over, and just plain lied about my country’s history when it came to people who are not white. I remember my sense of dislocation, confusion, sadness, guilt, anger, and a whole lot of other emotions as well as the resolve born in that moment to uncover what had been hidden from me.

The last months have presented to us another such time, a time when painful truths about our country have been revealed. Once again our country’s espoused principles are exposed to be at terrible odds with reality. For Unitarian Universalists, now is a time to boldly assert in every way possible the moral values we draw from our faith tradition. It is a time to call our political and cultural leaders to our highest national ideals. And one more thing: a time for all of us to study our past and present, and to learn how we got to this place, paying special attention to the voices of Black people, other people of color, and those who inhabit the cultural and economic margins.

Here are two voices to learn from:

“They Can’t Kill Us All”: Ferguson, Baltimore, and a New Era in America’s Racial Justice Movement by Wesley Lowery (Little, Brown, and Company, 2016) tells the story of the Black Lives Matter movement from its beginning, after the murder Trayvon Martin, through the public responses to the death of Black people at the hands of law enforcement in Ferguson, Baltimore, Cleveland, New York, and elsewhere. Lowery weaves a reporter’s narrative about what happened, spotlighting his personal encounters and experiences and his reactions, as a Black man, to those events and to the Black Lives Matter movement. He provides political and social context for the movement as well as in-depth portrayals of its leaders. He documents and explains one of the most important justice movements of our time with engaging, clear writing, a hallmark of the reporter’s craft.

Where Do We Go From Here: Chaos or Community? is Rev. Dr. Martin Luther King’s last book, published a few months before he was murdered in 1968 and republished by Beacon Press as part of the King Legacy Collection. It is fascinating to explore Dr. King’s analysis of the issues of his time—the successes of the Civil Rights movement to date and the ways in which there was much more work to be done. The book is both deep and wide, exploring the legacy of an economic system built on slavery, the birth of white supremacy supported by the cultural and scientific elite, and the racial injustice that defined our country in his time. As he looks to the future, he names global poverty, as well as poverty within the U.S., as major obstacles to peace and justice. Of special interest to Unitarian Universalists are chapters exploring white supremacy and the role white liberals have played in keeping that system in place:

Over the last few years, many Negros have felt that their most troublesome adversary was not the obvious bigot of the Ku Klux Klan or the John Birch Society, but the white liberal who is more devoted to "order" than to justice, who prefers tranquility to equality...
...yet in spite of this latent prejudice, in spite of the hard reality that many blatant forms of injustice could not exist without the acquiescence of white liberals, that fact remains that a sound resolution of the race problem in America will rest with those white men and women who consider themselves as generous and decent human beings...When evil men conspire to preserve an unjust status quo, good men must unite to bring about the birth of a society undergirded by justice.

Now is a time to seek the wisdom of voices from across our society. Let us know what you are reading these days as you respond to what is happening in the public square where you live.

“They Can’t Kill Us All” and Where Do We Go From Here: Chaos or Community? are both available from inSpirit: the UU Book and Gift Shop.

Discover more about injustice and justice-making in history. Find out about current justice movements and how you can take part. One place to start is to explore the list of General Assembly 2017 preparation resources. Share with others the resources you find! 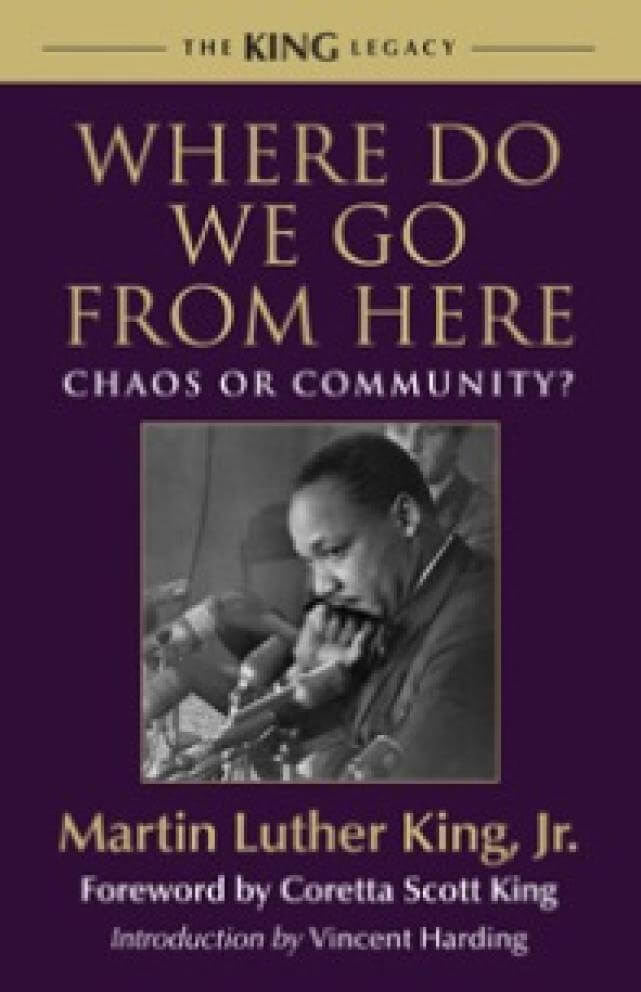 Where Do We Go from Here Chaos or Community?