“It's like everyone tells a story about themselves inside their own head. Always. All the time. That story makes you what you are. We build ourselves out of that story.”
—Patrick Rothfuss, The Name of the Wind

I thought about my first tattoo for a long time, but when a pregnancy test unexpectedly came back positive, my ink research took a new direction. I didn’t cancel my trip to the tattoo parlor; birthing this baby at this moment would harm everyone involved, and I knew that I would seek an abortion. But despite my certainty, years of anti-choice upbringing left me with shame and guilt so strong that I needed to etch it into my skin. My tattoo would be a scarlet letter in black ink, embedded in my body so that I could never forget what I was about to do.

And yet, the decision was also empowering. My head understood what my instincts denied: all the reasons abortion was the right choice for me at that time, and all the reasons why it was my choice to make. I chose a tattoo reflecting that complexity: Lilith, the she-demon said to steal away human babies and eat them, represented my deep sense of moral failing. Lilith, marked by an ancient Jewish story as the defiant first wife of Adam, represented release from the last clutches of anti-choice rhetoric buried within me. This empowered demigoddess tricked the Creator God into revealing His name to her. After speaking it, she fled the garden forever — free.

I’m not the same person who stood in that tattoo parlor eleven years ago, stomach turning as I checked ‘no’ on the waiver that asked whether I was pregnant. Since then, I’ve given birth three times, twice as a surrogate. I’ve studied religion and theology; I’ve become an intense feminist; and my ideas about abortion, faith, and Jewish scripture have all evolved. Still, I don’t for a minute regret being permanently marked with this snapshot in time, of my wounds and my hope.

I would never remove this tattoo or get a cover-up, because Lilith will always be part of me, just like the shaking, shivering girl on the recovery table. But I have thought about adding onto it, transforming Lilith into a tree of life with this woman in the center: the woman I was, and the one I’ve become. From baby-devouring, defiant she-demon, to life-giving partner in creation. Then again, maybe I don’t need to change the tattoo. Maybe telling the new story is enough.

Prayer
God of Transformation, we are grateful for this ever-changing life. May we have the strength to examine our old stories, and the imagination to resurrect them in ways which lead us toward a life of partnership in the work of creation and justice. 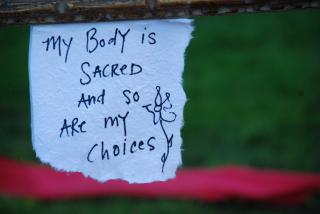 Prayer for Women Who Endured Abortions

Prayer for Women Who Endured Abortions