“You can dance in a hurricane, but only if you’re...in the eye.”
—Brandi Carlile

We were in the car when Kirk, my three-year-old son, said, “We don’t need guns in school. I know what to do—you have to hide and be quiet. That’s what Ms. Laurie says.”

I thought I misheard him. One. Two. Three: I waited to figure out what to say next.

At the parent-teacher conference the week prior, Kirk’s teacher Ms. Laurie told us about the active shooter drills and how they help keep the kids safe. “The kids think it’s a game,” she assured us. “They don’t understand.”

We were all wrong.

Kirk and I went that day to visit our congressional leader to talk about gun reform. Afterward, he asked for a donut. I was on full speed, but I stopped anyway. We sat in a cramped Dunkin’ Donuts while he ate his pink-frosted strawberry donut—with sprinkles, of course. We talked about his school and feeling safe. Kirk concluded, “We can make school safer. I like meeting people.”

For the past two years, life has often felt like a hurricane. I don’t know if it’s the political movement, the shattering of my privileged isolation, the acceleration of parenting, or some combination therein, but there are times when the sheer force of the winds terrify me.

I remember in the hospital after giving birth to twins, I was all adrenaline, ready to do loops in the maternity care unit. An experienced nurse approached me: “Lie down. Just for an hour.”

I don’t know if life is going to slow down. A donut in a cramped coffee shop, a cool breeze breaks loose across the march, an hour of sleep in the hospital bed. Being faithful doesn’t mean endless work. It also means attention to the movement of spirit that can appear as an hour of sleep, the truth of a toddler, or a donut in the middle of the day.

Prayer
Abide with me, Gracious One. Open my awareness to the cool breeze, the hour of sleep, the stillness in the midst of the storm.

Tending the Flame The Art of Unitarian Universalist Parenting 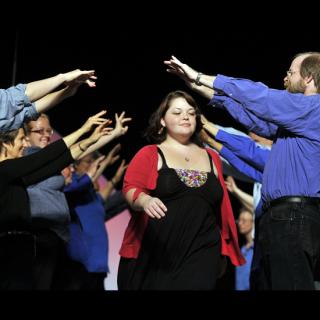 Prayer for our Children

Prayer for our Children