The Dynamics of Silence

By Erika A. Hewitt

“Every theory of power is implicitly a theory of community.”
—Rev. Martha Stortz, PastorPower

Silence is dynamic: it does things. When silence becomes a living character in our personal narratives, it’s often an accomplice to power.

When I was a new seminary graduate still short of the red-tape requirements for ministry, one of my mentors, who was married, propositioned me over a period of several weeks. Today, over a decade later, I’m less stunned by his violation of boundaries and decency than I am by how little I trusted my own sense of truth about what was happening.

Had he been so inclined (or provoked), this minister could have unrooted the tender sapling of my ministry. His power was an entrenched magnetic force—what theologian Marty Stortz names power over—which, coupled with my doubt, coerced me into silence.

What does silence gain us? What does silence cost? When I finally asked a female mentor for help, Katie took mercifully swift action, shielding me from retribution. Hers was a life-giving power with. And yet: beyond the rungs of her power, the System doggedly protected itself. The perpetrator rose in prominence. That larger silence—the sun around which the other planets of silence revolved—broke faith with me and with the truth.

These days, most of the women I know are grappling with rage. It stems from the ways we’ve been violated and from having to question or validate what our souls know to be true. I believe that our rage is also rooted in how complicated it is to break silence: to open all of the secrets in all of our broken hearts.

But silence does break; truth seeks the light. Our secrets are beginning to breathe fresh air again and noticing they’re not alone. That healing is partly fueled by the half-life of rage... but even more, we're unraveling silence because so many of us have determined that our power with one another is greater than the power someone once had over us.

Prayer
Gentlest of Ways, guide us to share our power in faithful ways. Remind us that when we companion one another into truth, we also make you present in our midst. 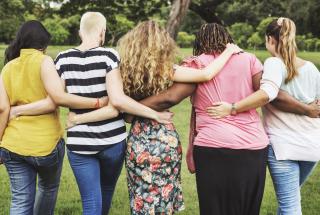 Spirit of Life and of Love, Holy One that reaches wide to encompass all beings, Hold us to Yourself in this moment. We come to this place carrying so much in our hearts. Around us we hear the laments of a broken world, Torn by fire, storm and strife, Crying, “I too have suffered. I too have been...